Another beer that I’d like to try brewing very soon would be an oatmeal IPA. I just had one by Threes Brewing in NYC, and it was pretty good. Did some research tonight, and here are my notes…

The description of this beer on their site is:

OK so we know it will be mostly 2-row, I’m thinking from other reading elsewhere that I’d like to try 10-20% oats in my first attempt, and that there will be some simcoe and citra hops involved.

For yeasts, I need to dig into finding one of these if possible…

Also in unrelated news, I should check out this bar:

Add some Victory or Vienna grain to the recipe.

Pound for pound, Flaked oats and Steel Cut oats should have the same impact on body, flavor, and mouthfeel.

Both processes begin with raw, dehulled oats. The “groats” are toasted to halt lipolytic enzyme activity that would make the oats go rancid. Here, the process diverges. Steel cut oats are cut along the length of the groat, giving that small, cylindrical appearance.

For flaked oats, the groats are steamed, then crushed between two rollers to flatten the kernels. After drying, the result is the flaked oats you can buy at the homebrew store, or in the grocery store as “Old Fashioned Oats.”

It’s important to note that steaming the oats changes the nature of the starch (gelatinizes it), making it accessable to amylase enzymes that convert the starch to sugar. If you’re going to use steel cut oats, you’ll need to cook them first.

As for the “nuttiness” you mentioned, you can increase it by baking the oats (flaked or steel cut) on a cookie sheet at 300F until, to quote Randy Mosher, “it smells like cookies.”

Today I decided it might be fun to try and brew a batch of Fuller’s London Pride, as that is a beer that I have here and there with friends and it might be a nice malty “not so hoppy” brew to have handy. Did some research, and found some useful information…

First, this BYO.com page had everything one might wish for related to making this beer. Everything I’m getting is right from there. It was a quick find, and it was very helpful.

So the details I’ll want to keep handy for planning this BIAB 5 gallon batch at home:

Just added a cool craft beer brewery from Oakland Park, Florida to the site. Funky Buddha Brewery started in 2010 and in their words “is committed to producing bold craft beers that marry culinary inspired ingredients with time-honored technique”.

This is a funny Thrillist interview article with Jeppe Jarniet-Bjergso from Evil Twin Brewing about how he came up with some of the names of their craft beers. It’s awesome, read it when you have a couple of minutes! 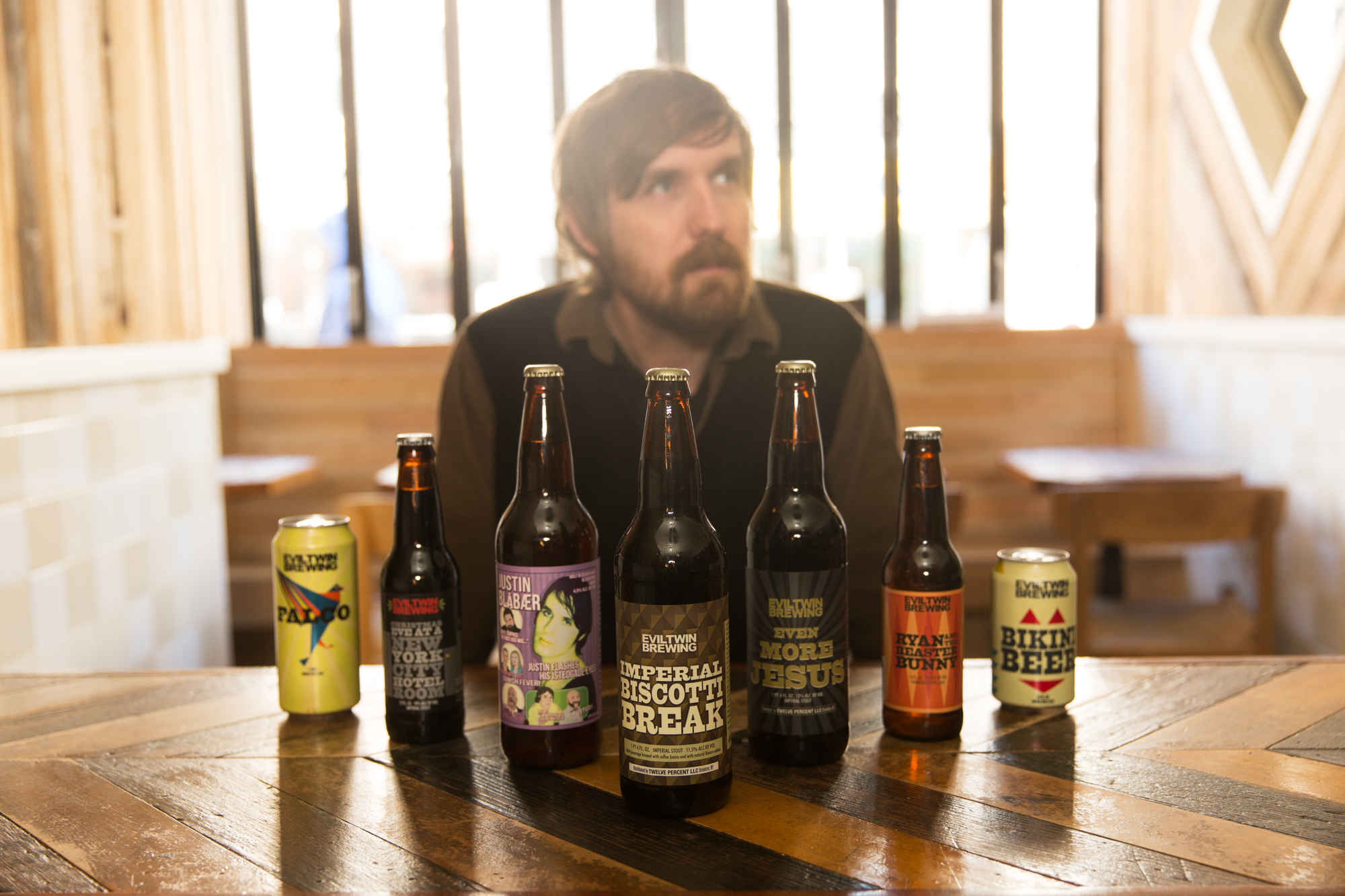 Pretty stoked, am going back to Flatiron Hall in NYC for a company get together tonight, a cool venue on 26th street in Manhattan that has a beer cellar in the basement along with a big handful of their own brewed beer offerings!

The holiday porter has been bottle conditioning for about a month and a half, and just in time for the holidays we got going on the bottle labels so these would be ready for sharing with friends and family. Actually we totally waited until the last minute to finish on this, but it all worked out. Erica and I worked on making a custom label design (read: Erica made an amazing label and I maybe gave two cents of feedback for the win), and then it was up to me to bring it home and get it printed and affixed. I found this to be quite a fun crafty adventure, here is what it took…

1) making the actual design in Photoshop. We made a 4″w x 3.5″h, 300dpi, transparent background file, then made the logo in that.

2) cut out a bunch of brown grocery bags into usable rectangles a bit larger than 8.5 x 11 (carefully avoiding thick or rough sections from the normal bag sections that make it a “bag”. carefully cut these down until they were exact custom 8.5×11 paper sheets.

3) made 4 equal copies of the label in PNG format so it was easy to print out in Windows 7 in the “3.5 x 5 in (4)” setting, with “Fit picture to frame” unchecked. Without any manual settings, this ensured the actual size of the logo was printed four times per each sheet of paper with just enough extra space to avoid compromising the size or borders.

4) once printed, made several careful cuts to trim out the logos with the desired size and borders.

5) once the labels were finished, it was time for the homemade glue to be made! a mix of 3Tbsp water + 1 packet gelatin, then after that is mixed added 6Tbsp whole milk and mixed until dissolved. Thanks to a blog post by Jessica Jones for this idea, it worked quite well (http://howaboutorange.blogspot.com/2012/09/glue-jam-and-beer-labels-to-glass-with.html)

7) Put a sponge on a plate, then soaked the glue into the sponge, then gently pressed each label one at a time to get the whole back moist and affixed to the bottles.

Here are some photos of the finished product:

the handmade labels, printed out and cut to size

The finished product by the campfire on Christmas eve 🙂